Just added to your cart

What is an Escape Room?

What is an Escape Room?

From Wikipedia, the free encyclopedia

An escape room, also known as an escape game, puzzle room or exit game, is a game in which a team of players discover clues, solve puzzles, and accomplish tasks in one or more rooms in order to accomplish a specific goal in a limited amount of time. The goal is often to escape from the site of the game. Most escape games are cooperative but competitive variants exist. Escape rooms became popular in North America, Europe and East Asia in the 2010s. Permanent escape rooms in fixed locations were first opened in Asia and followed later in Hungary, Serbia, Australia, New Zealand, Russia and South America. 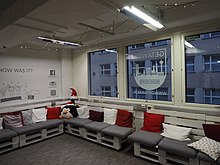 Escape rooms are inspired by "escape-the-room"–style video games. This is also the likely source of their name. They are also referred to as "room escapes," "escape games," "exit games" or "live escapes."

In spite of the name, escaping a room may not be the main goal for the players, nor is the game necessarily confined to a single room.

The participants in an escape room normally play as a cooperative team of two to ten players. Games are set in a variety of fictional locations, such as prison cells, dungeons, and space stations. The player's goals and the challenges they encounter usually align with the theme of the room.

The game begins with a brief introduction to the rules of the game and how to win. This can be delivered in the form of video, audio, or a live gamemaster.

Players enter a room or area in which a clock is started and they have a limited time to complete the game, typically 45 to 60 minutes. During this time, players explore, find clues, and solve puzzles that allow them to progress further in the game. Challenges in an escape room generally are more mental than physical. Different skills are required for different types of puzzles, ranging from chemistry to mathematics, geography, and a basic understanding of other subjects. Well-designed escape room puzzles don't require players to have expert knowledge in any particular field; any specialized or little-known information required to solve a puzzle should be obtainable within the room itself.

If players get stuck, there may be a mechanism in place by which they can ask for hints. Hints may be delivered in written, video, or audio form, or by a live gamemaster or actor present in the room.

The players "fail" the room if they are unable to complete all of the puzzles within the allotted time, but most escape room operators strive to ensure that their customers have fun even if they don't win. Some venues allow players extra time or an expedited walk-through of the remaining puzzles.

If players achieve the goal within the time limit, they win the game. Sometimes, teams with fast times are placed on a leaderboard.

Escape rooms test the problem-solving, lateral thinking ("thinking outside the box"), and teamwork skills of participants by providing a variety of puzzles and challenges that unlock access to new items or areas in the game when solved.

Escape room puzzles include word games, numbers, and "arranging things into patterns" such as substitution cyphers, riddles, crosswords, Sudoku, word search, and mathematics; puzzles involving physical objects such as jigsaw puzzles, matchstick puzzles, and chess; and physical activity such as searching for a hidden physical object, assembling an object, navigating mazes, or undoing a rope knot.

Different attractions contained elements similar to modern escape rooms and could thus be seen as precursors to the idea, including haunted houses, scavenger hunts, entertainment center 5 Wits or interactive theater (such as Sleep No More, inaugurated in 2003). An additional inspiration for escape rooms came from the "escape the room" genre of video games. Escape the room games, which initially began as Flash games for web browsers and then moving onto mobile apps, challenged the player to locate clues and objects while within a single room.

The earliest concept to resemble a modern escape room was True Dungeon, which premiered at GenCon Indy in Indianapolis, USA, in July 2003. Created by Jeff Martin (True Adventures LLC), True Dungeon had many of the same elements that people associate with escape rooms today; a live-action team-based game where players explored a physical space and cooperatively solved mental and physical puzzles to accomplish a goal in a limited amount of time. True Dungeon "focuses on problem solving, teamwork, and tactics while providing exciting sets and interactive props".

Four years later, Real Escape Game (REG) in Japan was developed by 35-year-old Takao Kato, of the Kyoto publishing company, SCRAP Co., in 2007. It is based in Kyoto, Japan and produces a free magazine by the same name. Beyond Japan, Captivate Escape Rooms appeared in Australia and Singapore from 2011, the market growing to over 60 games by 2015. Kazuya Iwata, a friend of Kato, brought Real Escape Game to San Francisco in 2012. The following year, Seattle-based Puzzle Break founded by Nate Martin became the first American-based escape room company. Japanese games were primarily composed of logical puzzles, such as mathematical sequences or color-coding, just like the video games that inspired them.

Parapark, a Hungarian franchise that later operated in 20 locations in Europe and Australia, was founded in 2011 in Budapest. The founder, Attila Gyurkovics, claims he had no information about the Japanese escape games and based the game on Mihály Csíkszentmihályi's flow theory and his job experience as personality trainer. As opposed to the Japanese precursors, in the games of Parapark players mainly had to find hidden keys or reach seemingly unattainable ones in order to advance.

In 2012, a Swiss physics professor created a scientific escape game for his students. The game was later offered to the public under the name of AdventureRooms and distributed as a franchise in twenty countries. The Adventure Rooms introduced scientific puzzles (e.g. hidden infrared or polarized codes) to the genre.

As of November 2019, there were estimated to be over 50,000 escape rooms worldwide. These can be particularly lucrative for the operators, as the upfront investment has been as low as US$7,000, while a party of 4-8 customers pay around US$25–30 per person for one hour to play, potentially generating annual revenue upwards of several hundred thousand dollars. As the industry has grown, start up costs have increased dramatically and so have the competition. Customers now expect higher production values and often games can cost over $50,000 to create. The UK has seen the market grow by over the past 5 years by 93%, 148%, 409% and 43%.

The format of a room or area containing puzzles or challenges has featured in multiple TV game shows over the years, including Now Get Out of That, The Adventure Game, The Crystal Maze, Fort Boyard and Knightmare. Similar experiences can be found in interactive fiction software and escape the room video games.

The South China Morning Post described escape rooms as a hit among "highly stressed students and overworked young professionals." Sometimes the excitement becomes a bit much, though, and players get so invested that they tear down equipment or decorations inside their fake prisons.

The use of Hong Kong room escapes as distractions from the living conditions of the real city of Hong Kong has been reviewed by local journalists.

Early games consisted mainly of puzzles that were solved with paper and pencil. Some versions are digital or printable only. As escape rooms became more sophisticated, physical locks were introduced that could be opened by finding combinations, hidden keys, and codes using objects found in the rooms. These ideas have evolved to include automation technology, immersive decoration, and more elaborate storylines to make puzzles more interactive, and to create an experience that is more theatrical and atmospheric.

The development of the new device as head-mounted display allows complement or even replace modern approaches to entertainment in the field of Escape Rooms. Multiplayer VR game ability can turn old school designed Escape Rooms into a new wave of Escape Games at virtual reality with big themes variety of locations and styles.